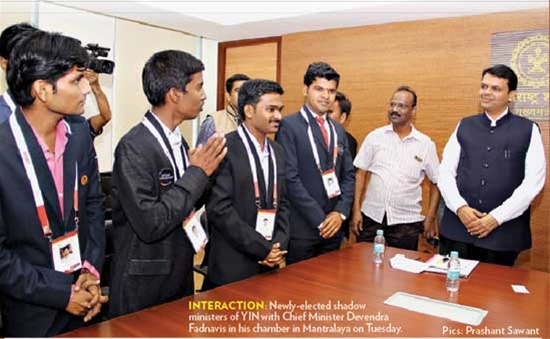 On the last day of the YIN conclave, the YIN ministers visited Mantralaya and also met ministers of the State cabinet. The YIN cabinet also met Water Resources Minister Vijay Shivtare. In the meeting with Chief Minister Fadnavis, the young ministers discussed various issues. Fadnavis told YIN ministers that young people have the power to learn more and do something different. “So work hard and work actively in your life,” Fadnavis said.

Shivtare said that the YIN ministers are responsible ministers and that they have to work with responsibility. “You all are shadow ministers of the State cabinet and you have to work very hard. If you study any subject thoroughly, then, we can elect you as non-government members of various government bodies and committees,” he said.