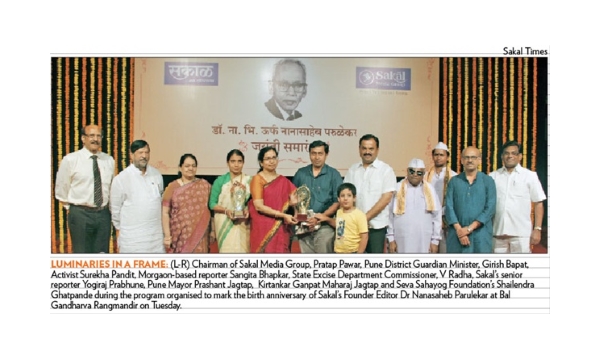 India can change into a better place if the government administration ensures people’s participation and transparency in its working, said V Radha, the State Excise Department Commissioner.

Radha was speaking at a function organised by Sakal Media Group to mark the birth anniversary of Sakal’s Founder Editor Dr Nanasaheb Parulekar at Balgandharva Rangmandir here on Tuesday.

Radha spoke on the topic – ‘Transparent administration and people’s participation’ and shared her experiences about working as an IAS officer.

Present on the occasion were Sakal Media Group’s Chairman Pratap Pawar, Pune Mayor Prashant Jagtap, among others. V Radha, who was born in Andhra Pradesh and has been in Maharashtra all through her career, said that her personality is defined by Maharashtra.

She said, “In my career, when I held prominent positions such as that of the collector of Aurangabad, I came to know that power for most means regulation or control and not development. For us, the most challenging task is that of team building and giving the team direction. For this, it is important to listen to the issues raised by those working under you and to lead from the front.”
Elaborating on the importance of taking people along while implementing projects, Radha said that the land acquisition for the Navi Mumbai Airport project became possible after making the farmers stakeholders in the project.

Radha also emphasised about using technology for bringing in efficiency and control. “In a lot of departments, the government follows a methodology during which files keep going around for permissions. Many of these procedures are not required and lead to corruption. Such procedures can be identified and removed. Also digitising records, thereby getting rid of middlemen, can now be done easily using technology,” she stressed.