Agrowon and the Delivering Change Foundation (DCF) have taken up the Smart Village initiative with the help of Israeli companies which is a front-runner in Agricultural development. The aim of the project is to make the farmers prosperous and cover villages which fit in the criteria. The final selection will be made on a survey with the help of experts from Israel. If the number of selected villages is more, the final selection will be made through a lottery system. The project will enhance the dignity of farmers through agricultural development and by providing them infrastructure with the help of the Government. 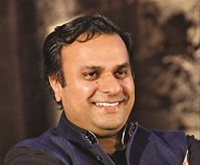 “Agrowon Smart Village project will be implemented in five selected villages in Maharashtra in association with companies from Israel. This is a unique project, enabling farmers to lead a life with dignity and honour, leading them to the path of prosperity and connecting them to the modern world. We are confident that the project will be successful with support from all of you”, says Abhijit Pawar, Chairman and Founder, Delivering Change Foundation.

The rural areas have been deprived of resources due to the increasing exodus to cities. Conversely, the arrival of people in cities in search of jobs has increased pressure on civic amenities. Problems of transport and pollution have gone beyond control. The excessive development of the urban sector at the cost of villages does not augur well for the future.

We need to create a system, which will bridge the gap between cities and villages. For this, our agricultural businesses will have to be strengthened and there is a need to empower farmers to compete at the international level.

The Israel-based Jethro and other companies have successfully implemented agricultural projects in a backward nation like Angola in Africa. Vital Capital, another company from Israel, has also made an investment in this project. Modern knowledge and technologies have been employed to sow the seeds of prosperity in the lives of the local Angolan farmers. These companies have totally transformed some of the villages within a period of five years. The local people who were deprived of basic food, have now become prosperous and are living in beautiful homes, availing modern amenities. Farmers in India face harassment due to lack of credit supply and infrastructure, natural calamities, uncertain weather conditions and a market system which is quite unstable. Introduction of the new knowledge and technology, will empower these farmers.

Problems arising out of water scarcity, is a major concern in Maharashtra. DCF has tried to solve them through their Water Lab initiatives. The State Government has launched the ‘Drought-free Maharashtra’ scheme based on the findings of the Water Lab. Sakal Relief Fund’s initiatives have succeeded in de-silting water bodies in over 200 villages with the help of local people’s participation which has helped in increasing the level of ground water. The Tanishka Foundation has also played an important role in this making this a success. During the past decade, Agrowon has been instrumental in expansion of knowledge and technology in the field of agriculture.

“The Delivering Change Foundation has performed very well in Maharashtra. The Foundation has also been conducting some projects in association with the Maharashtra government. The introduction of new concepts and ushering in changes through innovation has indeed been a path-breaking project. The agri-focused Agrowon Smart Village project, which is being implemented with the initiative of Agrowon, is a very good concept. The State government, too, has announced a Smart Village concept. Some of the ideas from Agrowon’s concept will be incorporated in the State government’s Smart Village concept and some ideas from the State government’s concept will be given to Agrowon for implementation. Congratulations to Agrowon and the Sakal Media Group for taking up this very positive project.” says Devendra Fadnavis, Chief Minister, Maharashtra.