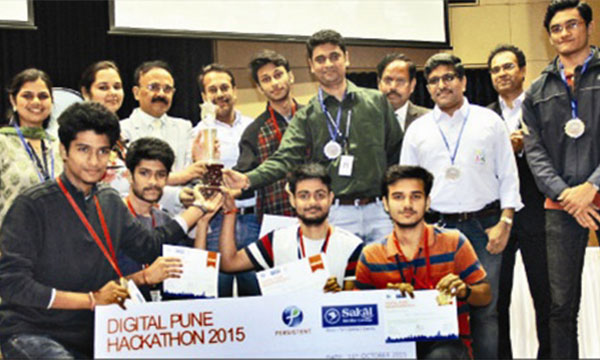 Team Aqua from the Army Institute of Technology, bagged the first position in the Digital Pune Hackathon 2015 for providing a solution for ‘Smart Water Distribution’.

Mr. Kunal Kumar, Municipal Commissioner, Pune presented the winning award to Team Aqua, winners of the competition held on Sunday who tried to solve the water problems in the city. Awards were also distributed for the first and second runner-up, along with other viewers’ choice awards with outstanding ideas. A total of nine teams were awarded across various categories.

This year’s Hackathon focussed on identifying various solutions to the current problems of Pune, and resolving these issues to move forward in the race of becoming a ‘Smart City’. The event was organised by the Sakal Media Group in association with Persistent Systems and I4C.

Mr. Kumar further added, “Almost every Puneite has at least one problem with the PMC and they often approach us with them. Here was a group of 200-250 students approaching us with solutions to city’s problems. This is a historic event that we are witnessing. I am interested in bringing the students, industry and government together to work towards resolving the prevailing issues.”

Mr. Rohit Chandavarkar, Resident Editor, Sakal Times said, “We at Sakal are trying to be a bridge between students and civic authorities. The Delivering Change Foundation (DCF) and Sakal Media Group (SMG) have been conducting events across the Globe. We want to be the communicators.”

Thirty teams comprising of 180 students participated in the competition, trying to work out easier and technical solutions to the problems like public transport, public health, waste management, water management and others. The solutions were devised by the teams over 30 hours of digital hacking.