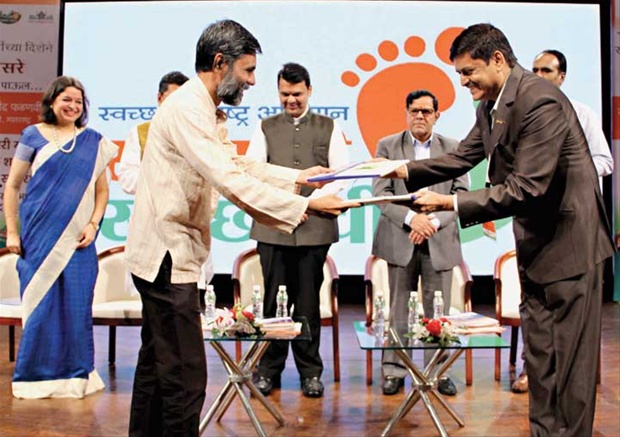 The Tanishka Women’s Dignity Forum, one of the initiatives of Sakal Media Group working under the leadership of Delivering Change Foundation, has accepted the challenge to make people aware of cleanliness and make Maharashtra clean and open defecation-free by 2019.

Chief Minister Devendra Fadnavis felicitated presidents of municipal councils and other authorities of 100 open defecation-free cities of Maharashtra on the occasion. He also launched a brand, ‘Harit Maha City Compost’ and released some books on cleanliness.

During the programme, some MoUs were signed with National Environmental Engineering Research Institute (NEERI), Tata Institute of Social Sciences (TISS) and Delivering Change Foundation for various initiatives on ‘Swachh Maharashtra’.

Under the Swachh Maharashtra Initiative, 100 cities became open defecation-free. The third party appointed by the Central government to decide clean cities (Swachh City) has selected 100 cities across the country, out of which five are from Maharashtra.

Sakal Media Group has also signed an MoU with the government to help in the Swachh Maharashtra movement. Shriram Pawar, Chief Editor of Sakal Media Group, signed the MoU in the presence of Chief Minister Fadnavis.

According to the State government’s initiative, all cities should be open defecation-free by 2019 and scientific methods to manage solid waste should be used in the metros.

“We are determined to make all cities open defecation-free by 2019. But it’s possible only when ‘Swacch Maharashtra’ becomes a people’s movement,” Fadnavis said.

“We have suffered a lot due to non-planning of cities. But still we can take it as an opportunity and move forward with people’s participation. We need to plan the future and development projects, taking into consideration the environmental aspects and a lot of thrust is needed on waste management,” Fadnavis said.

Members of Tanishka Women’s Dignity Forum will go door to door and create awareness among people about cleanliness. In the cities selected for the clean Maharashtra initiatives, the members will organise meetings with the residents of the locality and also organise function on cleanliness. 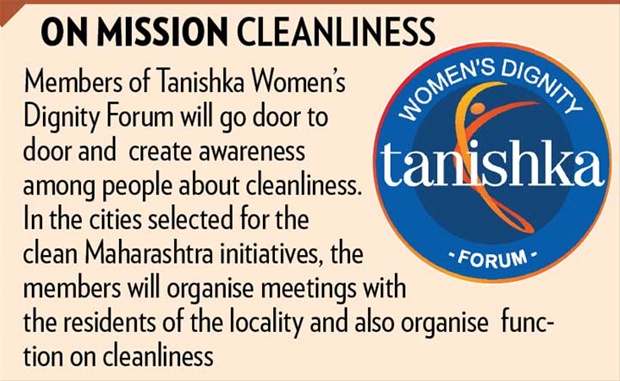