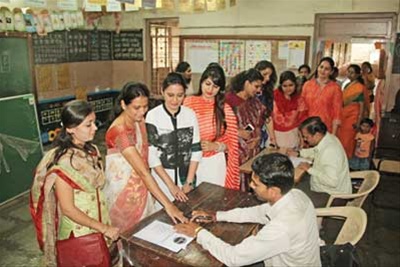 On the second day of the elections for Tanishka Women’s Dignity Forum, a large crowd of women voters reached various poll centres in the State as it was a Sunday. Sonai (Nevasa) in Ahmednagar district registered a record number of votes.

Since early Sunday morning, women including doctors, professors, health workers, tribals, farm workers and labourers, started coming in large numbers to vote in 14 districts across the State. Every voter, irrespective of their status, waited in a queue for their voting turn.

Despite it being a harvest season, women who work in the farms from the rural areas too reached the voting booths on time to vote, and later left for their work.

Through the Tanishka elections, women are coming forward with a feeling of ‘For me, for her and for us’, and have become more ambitious about their future. The Tanishka Women’s Dignity Forum election received an overwhelming response from women across the State.

On the second day of the elections, the voting process was conducted in 114 centres in the entire state. The women voters seemed enthusiastic as they were voting for the Tanishka representatives for the first time.

It was appreciating to see that every woman present to cast her vote had come for herself and for others like her. Women from all sectors – housewives, IT engineers, or in white collar jobs, labourers, elderly or retired and even students – participated in the Tanishka election.