The number of people in our cities and the people who are dependent on urban facilities has been increasing across the world. However, urbanization has given rise to many problems like air pollution, traffic congestion, mental and physical stress. The smart city project is being projected as a solution to these problems. Basically, there is a need to look beyond proposed investments and professional opportunities and actually study how a smart city would benefit the lives of its citizens.

The theory that technology alone can contribute in making a city ‘Smart’ is a myth. The Smart City concept should certainly make use of technology. Today, internet-linked facilities can be used easily. The smart cities will indeed use technology, but this alone will not solve problems created by urbanization.

People’s lives will be much better if we can link together the simplicity of Indian culture, the spirit of the universal family and become smart. We are looking beyond the concept of smart city to a perspective of people’s participation and engagement.

The work achieved in Tel Aviv in Israel was noticed while studying the smart cities which has easily connected people. This city has achieved the distinction of being the number one smart city in the world. The lessons from Tel Aviv will be useful while shaping the smart cities in Maharashtra. We have decided to constructively participate in the process through the medium of Delivering Change Foundation(DCF) in the initiative to build up Smart Cities in the state.

The factors that make cities ugly, the challenges created by these issues and the network of infrastructural facilities are important elements. Nonetheless, in the Smart City concept, the people’s participation and their easy accessibility to each other and various establishments is important. The Israeli Government, the Tel Aviv Municipal Corporation and the Maharashtra Government will be supporting the Sakal Media Group (SMG) in this Smart City initiative.

A study of Tel Aviv has revealed that the city has achieved excellence on various fronts. As a precursor to the efforts of improving the standard of living of the people in Maharashtra, we invited a few important officials of the Tel Aviv municipality to brief a selected group of Puneites. Puneites responded enthusiastically to this programme which was held in the city on Wednesday. Of course, we do not intend to copy the Tel Aviv model in toto. Some changes will have to be made keeping local situations in mind. The present era is one of urban participation. The days of ‘We will tell and you will obey’ is no longer valid. The people today have access to the power of social media. The concept of ‘Rule of people and run by people’ is being practiced.

We intend to use all the facilities at our disposal, from newspapers to the digital medium, to emulate the Tel Aviv smart city model and fine-tune it to local conditions. Through our Pune Bus Day movement, we had prepared a three-year-plan to strengthen the public transport system in Pune to make the lives of Puneites more comfortable. This was attempted with the active participation of Puneites.

While executing this initiative, we realized difficulties. It was the responsibility of the elected representatives and the administration to find solutions to these issues. While implementing the smart city project in 10 cities of Maharashtra, the local bureaucrats, the state capital administration, elected representatives and the Centre would need to work closely together.

We are committed to taking up our own responsibility in improving the quality of life of the citizens in these selected smart cities.

We have simultaneously mooted the concept of smart villages, as creating smart cities alone is not adequate. The planners of our proposed smart cities need to be acquainted with best practices in Tel Aviv, the world’s best smart city. This is why we have arranged a tour of Tel Aviv for the municipal commissioners and representatives of the 10 cities of Maharashtra.

In the future too, we will take up various projects to make the larger cities in our state more liveable. We are confident that the bureaucracy, elected representatives and citizens will support this initiative to make our cities more liveable and smart.

SMART GOVERNANCE, SMART SOCIETY
Cities are engines of progress, but face many a challenge in achieving their goals. Some of the urban development schemes proposed by the central government were not always effective. But, this scenario is changing. The former Congress led government executed the ‘Jawaharlal Nehru National Urban Renewal Mission’ and the BJP government has launched the ‘Smart City’ project.

TRAITS OF A SMART CITY
‘Smart City’ is not just a technology innovation. It is a people solution, where digital devices are just enablers. Technology can help us engage citizens, increase efficiency, empower sustainability, generate business and above all, improve the quality of life. Currently, there are many core thoughts on making cities more liveable, sustainable and viable. Most of them are about transforming our cities in the field of technology, energy, governance, sustainability and mobility. The source of all these inspirations is however two simple thoughts, making our city a better place and improving the quality of life for its citizens.

“The smart city concept is very innovative. The government is also planning to implement this concept in the State. We will definitely take the good ideas that emerge from the Delivering Change Foundation’s work in their smart city initiative. This will help in creating better infrastructure in various cities in the State. The State government, on the lines of the Central government, is planning to develop tier two and tier three cities. This will be an ambitious project of this government and it will change the lifestyle of residents of small cities in the State. The Delivering Change Foundation (DCF) has done massive work in various fields. DCF is also working with the State government on many fronts. DCF has come up with numerous unique concepts and they are implementing these ideas in innovative ways. The type of work they do can be a roadmap for development.”
— Devendra Fadnavis, Chief Minister, Maharashtra. 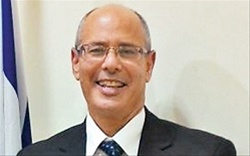 “We are very impressed by the work the Delivering Change Foundation (DCF) has done, whether it is the work done to tackle the water problem in Maharashtra or the smart cities initiative, DCF thrives by getting all the stakeholders together, understanding the issues at hand thoroughly and then implementing the solution on the ground. This is a very good model indeed.” says David Akov, Consul General of Israel in Mumbai.