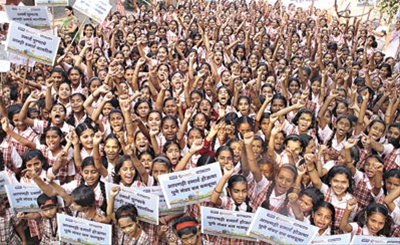 Thousands of students from schools across the city participated in the ‘Smart March’, creating awareness among citizens about the Smart City campaign launched by the Delivering Change Foundation (DCF) and the Pune Municipal Corporation (PMC).

The campaign aims to make Pune ‘Number One’ in the competition of Smart Cities. Students from over 40 schools across the city along with the teachers started the march at 8 am from their respective schools.

The students held placards with messages appealing to citizens for active participation to make the city smart and excel in the competition. They also suggested how individuals can contribute their bit to make the city Smart. The march also got a good response from citizens and passers-by who applauded the students.

The programme started with the students taking an oath to make the city ‘Number One’ by keeping it clean and green; and also pledged that they will not violate traffic norms.

Over 300 students from Kilbil School of Gokhale Nagar marched with boards saying ‘Keep Your City Clean’ and ‘Save Me, Save Earth’.