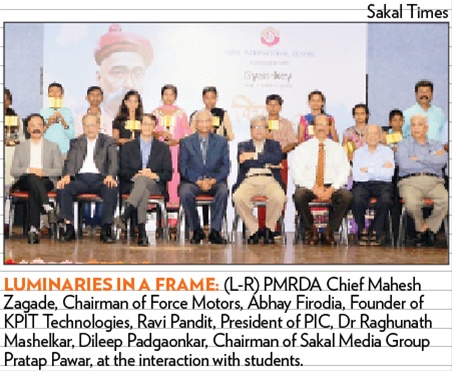 Seventeen students representing different regions of the State interacted with numerous dignitaries from the city about their success and how rural students can achieve success in life. The students were selected from among the 24,421 students who had participated in a ‘Vichar Spardha’ based on Lokmanya Tilak.

The competition was organised by Pune International Centre (PIC) in association with Gyan Key Libraries. The interaction was held at Yashwantrao Chavan Academy for Development Administration (YASHADA) on Saturday.

Answering a question about whether rural students are lagging behind, Pawar said that he does not differentiate between rural and urban.

“If a person like me can reach this level, each of you can, if you have the mind and willpower to succeed. You have to try and you will succeed,” he said.

The dignitaries advised the children to keep learning, have an ambition, ask questions and work hard to succeed in any field of their choice.

Each student also mentioned one problem that they feel is haunting the country during the interaction. They mentioned issues like inflation, growing population, addictions among youths, corruption, gender inequality and water shortage among others.

All winners were awarded trophies during the event. Each of 24,421 participants who sent in their entries for the Vichar Spardha will receive a participation certificate which will be signed by the dignitaries.