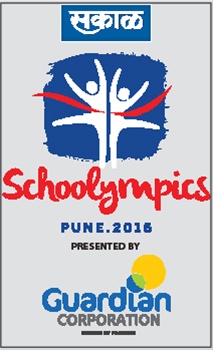 The day is onto us when one of the biggest inter-school sporting extravaganza gets underway with kabaddi courts at the Nehru Stadium will play host to the opening ceremony of the Sakal Schoolympics 2016 on Monday morning.

Kabaddi couldn’t have been better choice as the sport has given India best moments to cherish for years, and now in a new avatar kabaddi has attracted totally new generation of audience.

Only a fortnight ago India won the Kabaddi World Cup in Ahmedabad beating Iran in a tight match, which makes kabaddi as ideal sport to kick-start Schoolympics 2016.

A host of sponsors, including the title sponsor Guardian Corporation, will be in attendance at the opening ceremony scheduled at 8.30 am.

The essence of organizing an event of such a magnitude is to provide a platform for school children to showcase their skills in whatever sports they are good at as hope to cultivate Olympians of future.

The 32-day sporting extravaganza has on platter 2231 medals to be won in 402 sports categories in 21 disciplines. This time every medal will have points, which will help in finding the overall champion school among the entire gamut of sports.

Besides kabaddi, the action also begins in cricket and football at various grounds in the city. There are 12 matches on schedule at three venues in cricket and 28 in football at four venues making these team sports as highest participant grossing events.

Boxing will also start at the Gen Arun Kumar Vaidya Stadium in Bhavani Peth where after the morning weighing in and medical, draw of lots will be made before bouts will begin in the evening. 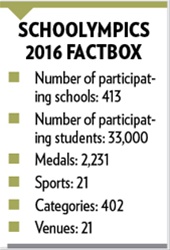 Boxing will be the first discipline wherein medals will be decided in two days time. Schoolympics is back after a one year gap. In 2014, the event had generated appreciation from all over the city. Parents also turned up on the venues in numbers to cheer their children.