The Sarva Jal Abhiyan (Water for All) campaign of the Delivering Change Foundation and Sakal Media Group, which aims to make Maharashtra water sufficient in five years, kicked off with the Jal Dindi at the Ranjangaon Mahaganpati  on Thursday, 28th August.

The Jal Dindi which has commenced from Ashtavinayaka, the eight holy Ganesh temples  of Maharashtra. These water tankers will  go to different corners of the State, garnering people’s support in making the State drought-free. 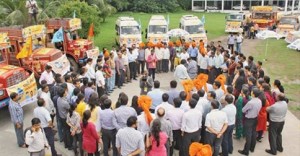 On  27th August, Jal Pujan was performed at Sakhar Sankul premises, Pune, and the sacred water was added into all the tankers. Each tanker will be accompanied by a team of Jal Mitras (water friends) who will explain the objectives of the campaign to the people during the tour.

This initiative by Sakal Media Group has received support from various sectors of society.