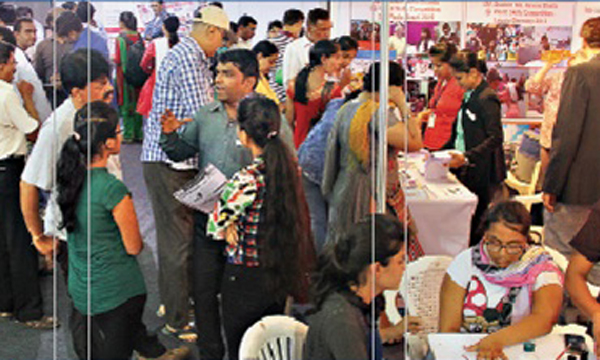 Pune: The three-day Sakal Vidya Educational Expo that helped the parents and students in the city to plan their career ended on Sunday.

Students and parents enthusiastically sought details of various courses being offered at the exhibition, which was organised by the Sakal Media Group at the Ganesh Kala Krida Mandir.

The exhibition had a lot of students visiting with their parents. A huge crowd was seen on the final day. “The response is great as we saw more than 400 students inquiring. Students are preferring the computer and IT field more in engineering this year as compared to mechanical last year,” informed Bhilare Amol representing the KG’s education institute, Trinity. The expo was mostly for graduation courses, which are the ones students do after Std XII, but a lot of Std IX, X and XI students were also seen, who are planning their careers right now.

Meghana Joshi, who was at the Maharshi Karve Stree Shikshan Sanstha’s stall, said, “I can see that students want to know in detail about everything and are focused too. They are collecting details from all the stalls. We saw that most number of students are interested in arts courses rather than science and commerce.”

The parents and the students saw and got to experience a lot of new things at the expo. “The expo had a lot of private colleges, which gave us a nice opportunity to compare the type of education in all,” said Ifra Jagirdar, who had come along with her younger brother, who had appeared for Std XII.

Sarika Todkar, a mother who had come to see options for her daughter who is interested in design, said, “We got to learn new things, courses and careers that were not there in our days. The expo actually showed the huge number of options that children have now.”