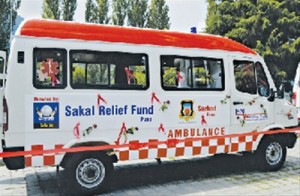 The HN Wanchoo Trust (HNWT), in association with Sakal Relief Fund and Pune-based Sarhad, has been providing vital 24×7 services with its fleet of five ambulances during the recent turmoil and unrest in the Kashmir Valley that left around 50 people dead, many blinded and around 2,000 injured.

All these ambulances were donated by Sakal Relief Foundation.

During the unrest, the locals faced various hardships, the most difficult being to get healthcare facilities and shifting serious patients to hospitals.
The ambulance service also transported some ailing Amarnath yatris to hospitals for treatment.

Interestingly this free ambulance service, formally launched on July 27 last year by J&K Governor NN Vorha, is completing one year of its service tomorrow.
During the unrest, the situation was challenging but the entire team of HNWT and Sarhad, Pune put in their best efforts to save lives. Braving the stone pelting and firing of pellets and bullets, the volunteers continued with their dedication.

In the last fortnight, HNWT ferried over 1,000 patients and managed to save many lives. These ambulances have been passing through most dangerous routes and ferrying patients.

Ambulances also transported patients who had come for yatra and had developed some medical problems. Majority of the yatris were from different regions of Maharashtra and were escorted by volunteers from Sarhad.

The 24×7 ambulance service and compassionate work by the volunteers developed a humanitarian bond between Kashmir and Maharashtra.

This idea of free night ambulance service was initially discussed by Dr Amit Wanchoo, Chairman HN Wanchoo Trust with Mr. Sanjay Nahar, Founder of Sarhad, who later discussed this project with Mr. Pratap Pawar, Chairman of the Sakal Media Group. Despite the initial challenge, all the three were able put this project into action with combined efforts. This project has been a great success and is one of the finest collaborations seen between private sector and NGOs.