PUNE: Sakal Relief Fund, with the support of readers of Sakal Media Group, undertook a drive in the past three years to desilt streams, nalas and lakes and has succeeded in creating the potential to store 533 crore litres of water in 256 villages all over Maharashtra.

Sakal Relief Fund is still continuing the drive in some villages and after completion of these works, the water storage capacity will further increase by 50 crore litres of water.

The desilting drive was carried out in Marathwada, Vidarbha and other regions in the State from April 2013 to March 2016. The project was conducted with the active participation of local villagers and the Sakal Relief Fund gave an aid of Rs 4.60 crore for it. Besides this aid, residents of these over 200 villages contributed by way of financial collection, voluntary labour donation, machinery and fuel.

Considering the contribution of the local people, the total value of these works will be around Rs 50 crore. In voluntary labour donation, the Sakal Media Group’s Tanishka Women’s Dignity Forum members played an important role.

The works have been completed in 256 villages and the ongoing works in 40 other villages are nearly complete.

It was informed at the meeting of the Sakal Relief Fund that funds have been sanctioned for 20 additional villages during the first stage of the current fiscal year.

The drive envisages percolation of each and every drop of rain into the soil, strengthening water sources, measures to increase groundwater levels and increasing people’s participation in government’s irrigation projects. With these projects, people have been efficiently coping with the present acute water scarcity.

The meteorology experts have forecasted that there will be above normal rainfall this year. With this background, nearly 356 villages in the state will halt rainwater in their farms and thus find a solution to the perennial water scarcity.

Sakal Relief Fund’s drive offers water to the scarcity-hit villages and this had given a fresh lease of life to rivulets, nalas, streams and lakes which had been victims of encroachments. The people’s participation in the scheme has revived these traditional water sources. Besides, these villages have received their rightful water storage capacity. It has been the common experience of local farmers that in many villages the water levels of wells are well-maintained even during the summer.

The silt removed from the water sources was taken by the farmers at their own expense to spread in their own farms. The collected murrum was used for constructing farm access roads. At Gudegaon village in Ahmednagar district, the villagers carried forward the works initiated by Sakal Relief Fund and constructed 13 bunds near their village.

AN APPEAL
Sakal Relief Fund has appealed to people to donate generously to help people cope with the drought situation. In the past too, readers of Sakal Media Group have responded well to the appeal to help people affected by various disasters. Those who wish to donate may deposit cash or cheques at the nearest office of Sakal Media Group. Donations given to Sakal Relief Fund are eligible for tax exemption under the Section 80 G of the Income Tax Act. 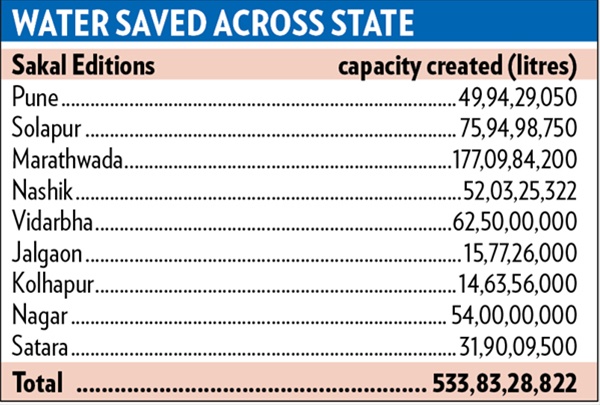