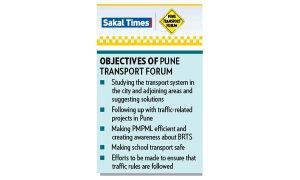 With a view address the long-pending issues of traffic congestion in Pune and Pimpri Chinchwad, the Sakal Media Group (SMG) has taken the initiative to form Pune Transport Forum. The forum which will see the participation of citizens, representatives from various NGOs and government officials will be inaugurated on Saturday.

This highlighted the fact that if the Pune Mahanagar Parivahan Mahamandal Ltd, (PMPML) services are improved, it will help reduce the number of private vehicles on streets. After the Bus Day, every month, the Sakal Media Group analysed the working of PMPML and made efforts to ensure that its working improves.

For this, apart from creating awareness amongst citizens, following up on important traffic-related issues with the help of experts, NGOs and government officials has become the need of the hour. For this, the Pune Transport Forum is being established. The way forward for this forum will be decided on Saturday.