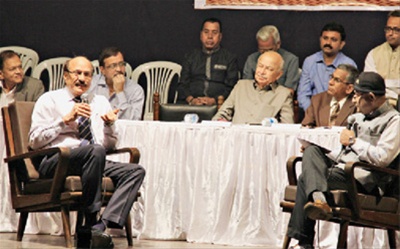 He was presented the award by former Chief Minister and former Union Home Minister Sushilkumar Shinde.

Suresh Mehta, President of Charitra Pratishthan said, “Pawar has greatly contributed to nation building and community development. It is the pleasure of our organisation that he was presented the award.”

Charitra Pratishthan instituted the award in 2002-2003.

Mehta said the young generation should consider Pratap Pawar as an idol. “His efforts towards community building through Tanishka Women’s Dignity Forum, Educon, journalism, Sakal Relief Fund and many other efforts are indeed great,” he said.

During an interaction at the ceremony, Pawar said, “My mother taught me the dignity of labour and also taught me right and acceptable behaviour. It is very important to be imparted that in childhood, as it is later needed in life. There was a rule at home, that after education is completed, there will be no free lunch and no financial security from home, which affected us and turned out to be a major reason for success.”

Speaking about his teachers, Pawar said, “They were strict and hence, my maths and science were good.” Also, he remembered one teacher taught him Sanskrit without any fees and hence his vocabulary was great.

Character awards were also given to 15 children studying in Std VIII, IX and X.

Giving the message of ‘never earn through wrong ways and find time for yourselves’, Pawar advised the children saying, “The future of the nation is good and you have to work on it. Don’t give importance to religion and caste. Use opportunities.”

Praising Pawar, Sushilkumar Shinde said, “He is a great personality, who never applied for Padmashree award. He got it for his work. Pawar’s media forum is different because of the responsibility to engage and empower people.”