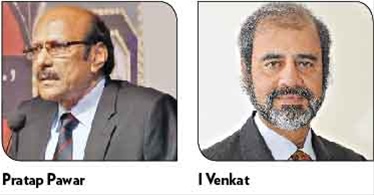 Director of Eenadu I Venkat was unanimously elected as Chairman of Audit Bureau of Circulations (ABC) for 2016-2017.

The Chairman of Sakal Media Group (SMG), Pratap Pawar, has been elected as one of the members of the bureau’s Council of Management.
ABC was founded in 1948 and is a non-profit, voluntary organisation consisting of publishers, advertisers and advertising agencies as members. It does pioneering work in developing audit procedures to certify the circulation figures of publications who are members of ABC.

The bureau issues ABC certificates every six months to those publisher members whose circulation figures confirm to the rules and regulations as set out by the bureau. ABC’s membership today includes 562 dailies, 107 weeklies, and 50 magazines plus 125 advertising agencies, 45 advertisers and 22 new agencies and associations connected with print media and advertising. It covers most of the major towns in India.

The advertisers’ representatives include Hemant Malik of ITC Limited as the Honorary Secretary, Sandip Tarkas from Future Retail Ltd and Mayank Pareek from Tata Motors Ltd.