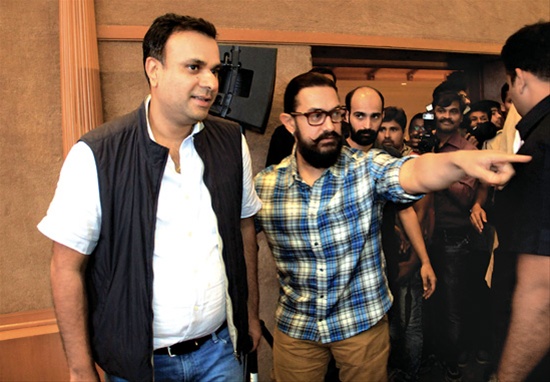 The Water Cup Contest 2017, organised  by Paani Foundation with an initiative of actor Aamir Khan for a drought-free Maharashtra, was launched in Mumbai. Sakal Media Group’s Managing Director and Founder of Delivering Change Foundation Abhijit Pawar (L) and Aamir Khan were present on the occasion.

The Water Cup Contest organised by ‘Paani Foundation’ with an initiative of film actor Aamir Khan is becoming a people’s movement and Jalsena or volunteers working in the field of watershed management are coming forward through this initiative, Chief Minister Devendra Fadnavis said here in a statement. He spoke at the function held at Sahyadri guest house in Mumbai. This year, the competition will be held in 30 talukas in 13 districts of the state.

Sakal Media Group’s Managing Director and Founder of Delivering Change Foundation Abhijit Pawar was present as a special invitee. Due to efforts taken by Aamir Khan, a people’s movement has been created in many drought-struck villages of the state, added Fadnavis.

He further stated that the water conservation slogan of the State government remained just a slogan and could not become a people’s movement in the past. Aamir Khan said that last year, through the competition organised by Paani Foundation, 1,368 crore litres of water was collected. He added that through public participation, this unbelievable feat was made possible in just 45 days. He said that if a similar experiment is repeated this year, then, he would be happier than the success and happiness he has received through the success of his recent film Dangal.