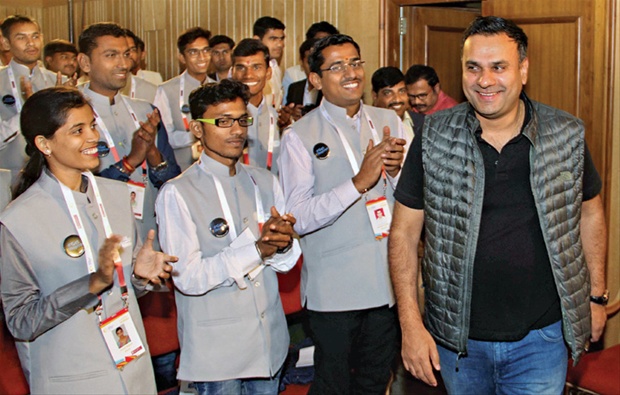 “Skill development and leadership are important issues for progress in the current scenario. To improve these skills, Young Inspirations Network (YIN) is working to develop such programmes in association with foreign universities. The YIN will launch three programmes for development of the students in Maharashtra,” Abhijit Pawar, Founder President of Delivering Change Foundation (DCF) and Managing Director of Sakal Media Group announced here on Saturday.

Pawar was speaking at a three-day convention of YIN. The oath ceremony of YIN ministers was also held on the first day of the convention.

Pawar had a dialogue with the newly-elected members and ministers of YIN. He expressed his views on the current political scene and social responsibilities. He also elaborated how the YIN, Sakal Media Group and the DCF can help the society.

While talking about the society and elected leaders, Pawar said that the connectivity between the society and the leaders is disappearing. “The leaders have lost their connect with the grassroots. Hence, the corporate and the top class of the society has to come down to understand the reality. YIN and Sakal Media Group will play a major role as a bridge between these sections to connect society,” he said.

“There are so many issues related to the society and its progress. Many people cannot afford fees of colleges and it is a major reason for unrest among the youngsters. But the Sakal Media Group and YIN are helping these sections,” he said.

Pawar also expressed his views on the education system. “There is something wrong in the system if someone wants to do business but he cannot identify his skills and is not able to choose the business even after completing his Masters in Business Administration (MBA). There should be some changes in the system. We have to identify the importance of skill development and the leadership. DCF will do the same. We have signed a memorandum of understanding (MoUs) with some universities in Israel, America and South Africa. We will bring them here to develop the youths. These universities are also very keen to come to Maharashtra,” he said.

“The government, corporates, NGOs and researchers are the sections of the society who can resolve the problems of the society. We will rope in all these sectors in the process to progress,” he said.

Pawar also took an over view of Indian farming and farmers. “I have visited Israel which is a desert and the farmers of Israel changed their entire farming. They overcame the nature and made farming sustainable. Compared to Israel, our farmers and our farming is 100 times rich, only we have to overcome the nature and have to change the mentality,” he said.

Pawar said that there are many ‘think-tanks’ in various sectors, but there is no ‘action tank’ or ‘do tank’. “There should be an ‘action tank’ which will work in the direction where all the sections of society including rich, poor, intellectuals and the common man will share their thoughts and ideas of respective fields with each other,” he said.