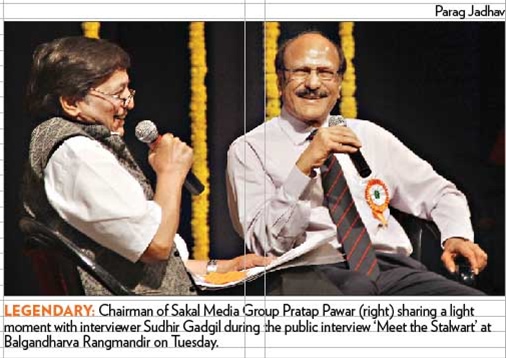 Shri Pratap Pawar, Padma Shri awardee and Chairman of Sakal Media Group, feels that Prime Minister Narendra Modi must succeed in his endeavours and people must give him a chance.

He was responding to questions during a public interview ‘Meet the Stalwart’ with compere Mr. Sudhir Gadgil organised by the Jan Seva Foundation, Lions Club International 323 D2 and many other organisations at Balgandharva Rangmandir.

When asked about his views on Prime Minister, Shri Pawar said, “I feel that Mr. Modi must be successful as he has the determination and sincerity. I do not doubt his intentions. People must give him a chance to succeed.”

During the interview, Shri Pawar also touched on several facets of his personal life starting from his childhood and educational decisions to running the business and being associated with so much social work. He shared his experiences while studying at Fergusson College in Pune, followed by his graduation in Engineering from Birla Institute of Technology and Science, Pilani.

Speaking about his association with social work, Shri Pawar said he wishes to do as much good for the society as he can in his lifetime.

“I have met numerous selfless people in my life and even seen social work undertaken by my family. This has developed a social mindedness in me. I was handed the responsibility of Poona Blind School soon after my graduation. I have never asked anyone for any post, people have come to me,” he said.

He spoke about Sakal Relief Fund, the establishment of a community college in Kolhapur and helping students through the incubation centre at the Science and Technology Park at Savitribai Phule Pune University. Pawar also spoke about his association with the Bal Kalyan Sanstha and Vidyarthi Sahayak Samiti.

Speaking about Mr. Sharad Pawar, he said that neither he nor any other siblings have ever thought of being dependent on him in life. He added that when he was planning to buy Sakal, he was very clear that the paper would not be a publicity tool for political purposes. “In the last 35 years, Sakal has been working for the benefit of the society. I have given the editors complete freedom,” he explained.