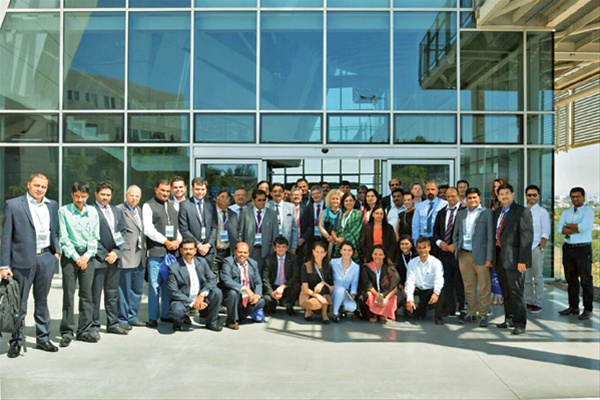 In terms of population and area, Israel is smaller than Maharashtra, yet the country’s progress has amazed many countries.

This mystery of Israel’s development was unraveled during the conference Educon 2016, organised by Sakal Media Group at Tel Aviv in Israel on Tuesday.

The academic experts of Israel mentioned that the country’s education system, which changes according to time, is innovative, and gives priority to entrepreneurship, and is the foundation of the success.

In Tuesday’s session of Educon 2016, the participants were apprised of how the education system brought positive change in the country, encouraged the young entrepreneurs and developed courage among them to win the world.

The academic experts of Israel also discussed what are the lacunae in the Indian education system.

The concept of this year’s Educon conference is ‘Entrepreneurship and Innovation’.

This is the 12th edition of the conference organised by the Sakal Media Group.

During the formal inauguration of the two-day conference, Prof Raanan Rein, Vice President of University of Tel Aviv, said that research and students are the true cultural ambassadors for a country. Rein elaborated the improvements made in Israel’s education and professionalism.

“For the research and financial help, Tel Aviv University looked forward to America and European countries. But now, Asian research funds are aggressively coming forward in this regard. India’s Tata Group has helped the Tel Aviv University to the tune of 50 lakh USD for research purposes. And today, Educon conference is being held here. This shows the increasing research-partnership between Israel and Asian countries, specifically India,” Rein said.

Zohar Sharon, Chief Knowledge Officer, Tel Aviv-Jaffa Municipality, said that there are many similarities between India and Israel. Mentioning that Tel Aviv was honoured with the ‘World Smart Cities Award’ in 2014, Sharon spoke on various schemes proposed by Tel Aviv for the Smart City project in India. Rein and Sharon praised ‘Educon’ and thanked Sakal Media Group for organising the conference in Tel Aviv.

On the first day, more than 40 educationists visited laboratories of Tel Aviv University. There were four sessions of the Israeli experts.

‘Local education system is the key’

During the inaugural session, Abhijit Pawar, Managing Director of Sakal Media Group, said that the local education system is the key to Israel’s progress.

“Today, India needs to compose skill-based academics. Through conferences like Educon, Sakal Media Group is trying to initiate the thinking process which will not only help Maharashtra, but the entire country,” Pawar said.