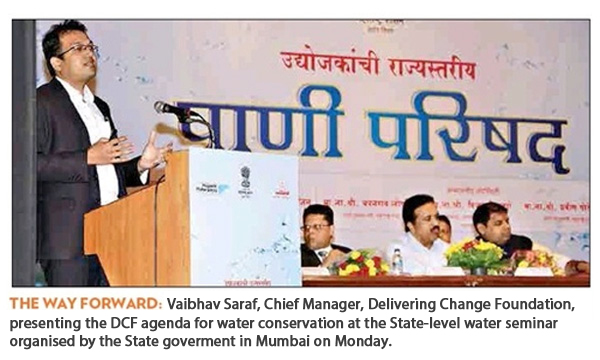 The Delivering Change Foundation (DCF) has suggested four R’s – Reduce, Reuse, Recycle and Recharge in order to reduce the dependency on water by industries.

The Sakal Media Group, along with DCF, had a special segment ‘Water for All’ as a part of their Water Lab initiative. The water experts submitted a detailed 32-point suggestions to the State government with an aim to help improve the water crisis. Jalyukta Shivar and other methods of water conservation were also discussed.

Mr. Vaibhav Saraf, Chief Manager, Delivering Change Foundaton (DCF) urged the government to speedily implement these suggestions from the lab. Currently, the State is deficient by 16 percent water and this needs to be reduced by attempting to reuse water, especially when the upcoming industries are going to be heavily water dependent.

Maharashtra Industries Development Corporation (MIDC) has to strictly implement the water conservation schemes which include monitoring water leakage, re-using and recycling of water. Mr. Saraf said, “In comparison to other countries, India is still lacking in recycling water. Vapourisation too needs to be tackled. Recycling of water is an expensive affair and therefore industries should unitedly work in this regard.”

Mr. Saraf further added, “On the style of China, there should be exchange of water sources which will greatly help water planning. In China, water recycling projects are shared in industrial estates which saves unnecessary expenditure. This also helps use of water by all. Such a system is also in operation in Denmark.”

According to Mr. Saraf, “Farmers, Entrepreneurs, Common Masses and voluntary agencies should be involved in finalising policies. Demand for water and available sources should be reviewed while making policies. Industries should increase capabilities to use water”.