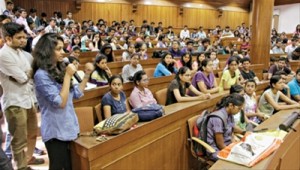 The students of College of Engineering, Pune (COEP), are keen to promote the ‘Smart City’ project initiative in the city. They took part in an interactive session with Sakal Media Group’s journalists and expressed their views about how to transform Pune into a Smart City.

The Delivering Change Foundation (DCF) and Sakal Media Group (SMG) have launched an initiative to ensure that Pune leads in the nationwide Smart City competition. The Pune Municipal Corporation (PMC) has also extended a helping hand to the project. The mission will be achieved with participation of maximum number of people.

During an interaction, students suggested that solid waste management should be given priority and the policy of “Reuse, Reduce and Recycle” should be implemented.

Some students expressed need for better public transportation to reduce traffic and pollution.

Some students suggested that there should be smart cards for paying bus and autorickshaw fares and paying of fines for traffic violators. Moreover, technology like GIS mapping can be used for all the information of city from drainage to bus stops and routes etc.