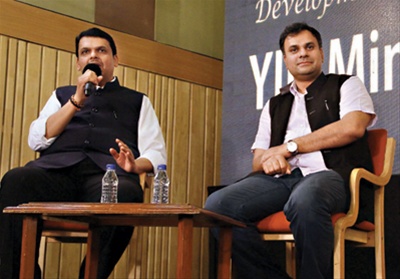 Mumbai: Chief Minister Devendra Fadnavis here on Thursday expressed confidence that the pace of government’s functioning will increase if there are communicators like members of Young Inspirators Network (YIN). Addressing the concluding session of Sakal Media Group’s YIN Assembly, Fadnavis said, “There is no fault of planning in the development process but there are difficulties in implementation.”

Fadnavis said that the inequality gap between cities and villages will be abridged with investment in agriculture and converting the villages into ‘smart’ villages with the help of modern technology. The aim of integral development will be achieved through people’s participation and cooperation of the YIN members, he said.

The YIN Assembly session turned lively with an interaction of the YIN Cabinet and district guardian ministers. The Chief Minister answered the various questions on agriculture, irrigation, urban development and rural development. “The Jal Yukta Shivar programme has been successful,” Fadnavis said, adding that the network of the YIN will be efficiently used for this programme. He said that a water grid will be used for drought-prone areas like Marathwada and water will be supplied through closed pipes to prevent evaporation.

Education Minister Vinod Tawde, who also addressed the YIN Assembly, has offered the YIN cabinet an opportunity to attend the forthcoming budget session of the Maharashtra State Legislature. “The youth will also get to know how the questions and answers are prepared before the Assembly session and how replies to the questions raised by the legislators are prepared,” Tawde said. He added that the government is planning to conduct the college elections on the style of the US Presidential elections.