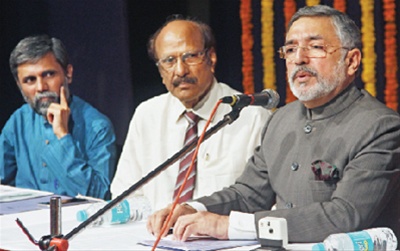 Considering the security threats that India faces at present, diplomatically, India has taken the right steps by improving relations with Saudi Arabia, America and its neighbouring countries including Sri Lanka, Nepal, Afghanistan and Burma, said Shrinivas Sohoni, an administration and policy expert.

Sohoni said that national security is not just the responsibility of the government but support from the citizens is also important.

“As citizens, everyone must see to it that they do not say things that would deter the armed forces and should not believe in rumours. Also, citizens must cooperate with the administration and police,” said Sohoni.

Speaking about ways to solve the Kashmir issue, Sohoni said that for this, India must use power and tactfulness. He added that if right steps are taken against Pakistan, the conditions in Kashmir would also improve.

“Pakistan has declared the first strike policy while India has no first strike policy, which India should rethink. Also till Pak remains an enemy for India, it is meaningless for India to provide any financial, political and social concessions to it,” added Sohoni.